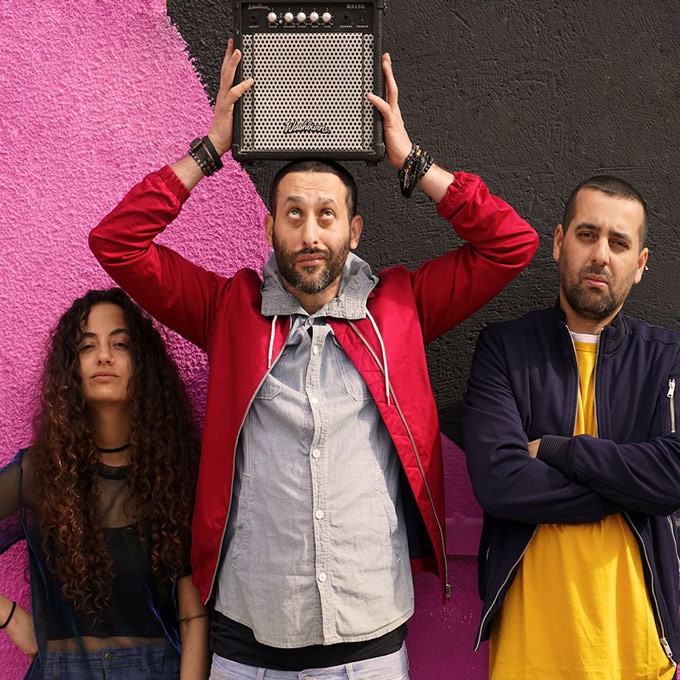 Heralded by the major French newspaper Le Monde as « the spokesman of a new generation, » DAM, the first Palestinian hip hop crew and among the first to rap in Arabic, began working together in the late 1990s. Struck by the uncanny resemblance of the reality of the streets in a Tupac video to the streets in their own neighborhood of Lyd, Tamer Nafar, Suhell Nafar, Mahmoud Jreri were inspired to tell their stories through hip hop.

After their timely song « Min Irhabi » (Who’s the terrorist) was downloaded over a million times shortly after its internet release in 2001, DAM became a household name among youth throughout the Middle East. Rolling Stone in France distributed the song free in one of their issues, and the song has been featured in various compilations.

Ten years of performing all over the world has strengthened DAM’s commitment to continue living in their hometown of Lyd, fifteen minutes from Tel Aviv, working to provide the youth of the city and neighboring communities with programs and opportunities that have otherwise been denied to Palestinian citizens of Israel. In addition, they have conducted workshops for young people from the West Bank to the US, Canada, and Europe.

« IHDA » (Dedication), DAM’s long-awaited first international album, was released in 2007, and DAM has seen its songs and members featured in films such as « Ford Transit » (Dir. Hany Abu Assad) « Where in the World is Osama Bin Laden? » (Dir. Morgan Spurlock), ‘Salt of this Sea’ (Dir. Annemarie Jacir), and « Local Angel » and « Forgiveness » (Dir. Udi Aloni). DAM’s history and influence on the Arab hip hop scene is detailed in the feature-length documentary « Slingshot Hip Hop » (Dir. Jackie Reem Salloum). The group has also been featured in Vibe, National Geographic, Rolling Stone, Q, Basement, Reuters, and The New York Times, and has appeared on MTV, CNN, BBC, and Al Jazeera.